Project Linus provides handmade blankets to bring comfort to sick children
​
Local group has contributed over 10,000 ‘blankies’
​
BY ELIZABETH LENHART For The Echo
​Lois Misko, of Pittsburgh, started making fleece blankets following her retirement in January of 2006. At the time, Misko’s mother-in-law had fallen and broken her hip, so Misko was spending a lot of time sitting with her while she recovered. Needing something to do with her hands that would still allow her to visit, Misko started making fleece blankets for her daughter and friends. Soon family and friends had more than enough blankets, and Misko’s friend told her about Project Linus. She knew right away that this was something she wanted to do. She organized a group of like-minded women and contacted the Good Shepherd Lutheran Church in Pittsburgh about allowing them to use a space in the church for a new Linus Blanket group. The church enthusiastically welcomed them.
At first, a group of about ten blanketeers met once a month at Good Shepherd, but gradually that turned into twice a month and then even some Saturdays. The meeting space was wonderful but hauling everything—sewing machines, fleece, yarn, blankets and more—became a little too difficult especially when the weather was inclement, and Misko’s basement was becoming overrun with blankets. The group needed a more permanent and larger space. 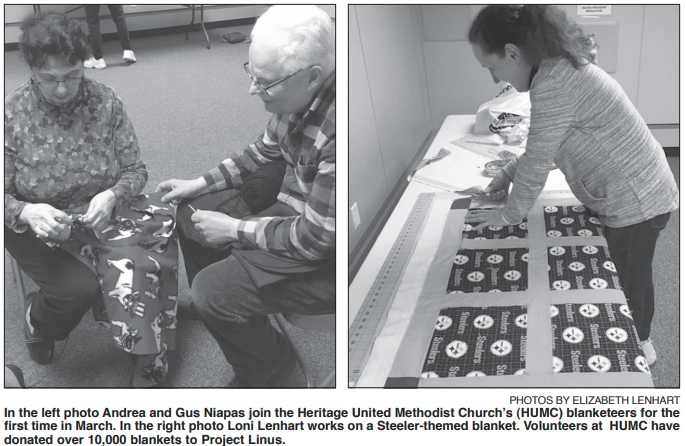 ​Misko found an available unit at the Caste Village Shopping Center in Pittsburgh, and to her delight the owners, the Caste Family, allowed her group to use the space for free when she told them about Project Linus. The grateful group utilized the space for a few years, delivering about a thousand blankets a month to area hospitals, the Ronald McDonald House, the Military Comfort Center and more.
As the project continued to grow, in 2012 Misko became the coordinator for the Greater Pittsburgh Area Chapter of Project Linus and the group soon outgrew their space. So the Caste family renovated an old duck-pin bowling alley for the chapter to use as its headquarters. It was a lot more space and the group is still making great use of it today. To date, the Greater Pittsburgh Area Chapter of Project Linus has distributed over 195,000 blankets to places serving infants and children in need in Allegheny, Armstrong, Butler, Washington and Westmoreland counties. But they don’t do it alone. There are many community groups involved in Project Linus in Western Pennsylvania who contribute to the cause, including one right here in Ligonier.
​When she came home to Ligonier that spring, Shaffer continued working on blankets whenever she could. At the 2013 Relay for Life event at Weller Field in Ligonier, Lynne Flower, the then-pastor’s wife at HUMC, saw Shaffer crocheting a beautiful children’s blanket while she was volunteering at a booth. When Flower found out why Shaffer was making the blanket, she asked her to share Project Linus with the church’s Circle of Ruth women’s group, hoping it would be something the church could do. That fall, the Heritage Project Linus Chapter was formed and it was full steam ahead. In fact, Misko calls the Heritage Chapter her most prolific group of blanketeers.
That first year, the Heritage blanketeers made over 700 blankets, and from October 2013 to this past December 2020, the Heritage Chapter had made 10,164 blankets for infants and children in need of comfort locally and throughout Western Pennsylvania. The chapter makes fleece blankets, quilts and knitted or crocheted blankets.
For questions or more information, contact the church office at 724-238-2627. To donate to Greater Pittsburgh Area Project Linus visit their website www.projectlinuspgh.org.